On February 7th, The Monetary Policy Committee (MPC) of the Bank of England (BoE) decided to leave interest rates at the rock bottom rate of 0.5%. In doing so, the MPC acknowledged that it was assuming that the current stubbornly high inflation would eventually return to the target 2%. The MPC is expecting productivity gains and the reduction in external price pressures to do the trick.

“Inflation has remained stubbornly above the 2% target. Despite subdued pay growth, weak productivity has meant no corresponding fall in domestic cost pressures. And increases in university tuition fees and domestic energy bills, largely resulting from administrative decisions rather than market forces, have added to inflation more recently. CPI inflation is likely to rise further in the near term and may remain above the 2% target for the next two years, in part reflecting a persistent inflationary impact both from administered and regulated prices and the recent decline in sterling. But inflation is expected to fall back to around the target thereafter, as a gradual revival in productivity growth dampens increases in domestic costs and external price pressures fade.”

I took particular interest in the claim that external price pressures will fade. To do so, the global economy would have to remain weak. If so, then it is unlikely that growth in the UK will fare much better, even at the projected “slow but sustained” pace. The other possibility is that the British pound or sterling – CurrencyShares British Pound Sterling Trust (FXB) – appreciates enough that external prices go back down. If so, then Mervyn King’s hopes of rebalancing the economy with a reduction in demand for imports and an increase in exports surely will not be realized.

Adding to this conundrum for the UK economy is the stubborn persistence of weak economic growth (mainly flat) along with strong employment growth. The UK economy is getting less and less productive and thus less and less capable of offsetting inflationary pressures. This is a dynamic that I will be watching ever more closely given the BoE projects a two-year horizon over which the economy will continue to suffer high inflation and weak economic growth (aka stagflation). The implication for the currency is mixed, and I continue to expect “more of the same” for the pound.

The Swiss franc has had an incredible run over the past two years that has accelerated in 2011 as many traders and investors have sought “safety” from the European sovereign debt crisis. The Swiss National Bank has utterly failed in its varied attempts to fight currency appreciation over this time. (See “No Currency Peg Yet for the Swiss Franc As SNB Escalates” for the latest in this drama).

At one point this year, the franc had gained over 30% on the euro in the span of a few months!

A story out of Marketwatch provides a fascinating example of the impact of a much stronger currency: price deflation. In “Swiss supermarkets cut prices, cite franc strength” we discover Swiss shoppers are crossing the border to take advantage of their stronger currency to buy cheap goods in places like Germany and France. To win back the business, Swiss supermarkets are cutting prices and pressuring suppliers to lower their prices as well. Stories like these are important to watch as competitive devaluations continue to unfold across major currency countries.

Inflation may be forcing China to let its currency appreciate

In “Beijing turns to currency to cool inflation“, the Associated Press gives a good summary of China’s current problems with inflation, including the following:

“Economists blame China’s inflation on the dual pressures of consumer demand that is outstripping food supplies and a bank lending boom they say Beijing allowed to run too long after it helped the country rebound quickly from the 2008 global crisis.

Attempts at price controls, subsidies for the poor and orders to local leaders to guarantee adequate vegetable supplies have had mixed results.”

The failure to control inflation to-date is forcing China to allow the currency to appreciate faster. The near-term increases still seem modest at 5% (against the dollar), so it will be interesting to see whether China continues pushing harder on non-currency methods.

China’s currency is not traded on open markets, but if it were, it seems the currency would soar given current conditions.

CNBC reported that “Adjusted For Inflation, Dollar Hits Fiat-Era Low.” Economists at Deutsche Bank calculated the value of the dollar on a trade-weighted basis and then made adjustments for inflation. Their conclusion is that the dollar is at its lowest point since the U.S. went off the gold standard under President Richard Nixon.

The full article is worth a read but here is a key quote:

“The recent parabolic spike in silver and to a lesser degree gold, shows that the market considers a ‘disorderly decline’ of the U.S. dollar an increasing possibility…”

Gold has trended straight up since its recession lows

Click here to see how the U.S. stock market remains in an 11-year sell-off when priced in gold.

Gold also looks to continue higher. According to a recent article in Bloomberg:

“Central banks that were net sellers of gold a decade ago are buying the precious metal to reduce their reliance on the dollar as a reserve currency, signaling demand that may extend a record rally in prices.” 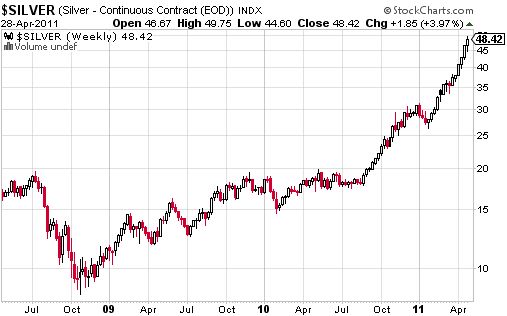 Silver's rise has accelerated over the past year