Australia’s mining sector has done extremely well, largely from exports to a rapidly growing China, especially for commodities like iron ore and coal. This rising wealth helped Australia emerge from recession earlier than most other developed economies and prodded the Reserve Bank of Australia to hike interest rates multiple times.

This amazing growth has come with costs, primarily in the form of higher labor costs. In “Lovesick Miners Raise Costs for Rio, BHP,” Bloomberg describes how the isolation of work in the remote mining areas makes these jobs very unattractive. Mining companies like BHP Biliton (BHP) and Rio Tinto (RIO) not only have to pay extremely high wages as compensation, but they also must include other perks to help miners deal with the isolation. For example, work schedules for miners can include extended trips to major cities in between extended shifts. Still, major shortages of labor exist in many skills. Australia will likely need to rely more and more on foreign workers to do these jobs – the isolation THOSE workers will feel will likely be many times what Australian miners feel. So, this dynamic will be important to watch.

Overall, this article is a fascinating look into the lives of Australian miners and how their work impacts their ability to gain and maintain relationships.

The Swiss franc has had an incredible run over the past two years that has accelerated in 2011 as many traders and investors have sought “safety” from the European sovereign debt crisis. The Swiss National Bank has utterly failed in its varied attempts to fight currency appreciation over this time. (See “No Currency Peg Yet for the Swiss Franc As SNB Escalates” for the latest in this drama).

At one point this year, the franc had gained over 30% on the euro in the span of a few months!

A story out of Marketwatch provides a fascinating example of the impact of a much stronger currency: price deflation. In “Swiss supermarkets cut prices, cite franc strength” we discover Swiss shoppers are crossing the border to take advantage of their stronger currency to buy cheap goods in places like Germany and France. To win back the business, Swiss supermarkets are cutting prices and pressuring suppliers to lower their prices as well. Stories like these are important to watch as competitive devaluations continue to unfold across major currency countries.

Gold has soared over the last six weeks. I never thought about its impact on manufacturing because I have believed gold is a very minor component of any production process. However, over at Marvell Technology (MRVL), high gold prices are squeezing margins enough to make the company plan switching to copper. From Seeking Alpha transcripts of MRVL’s earnings call on August 18:

“The price of gold has increased from about $1,200 per ounce a year ago, to over $1,700 today. This has eroded our gross margin by about 1.5% in that period. We are transitioning to copper, but this will take some time.”

MRVL also noted that foundry prices have fallen more slowly than expected, and the company is looking for new fabs with better pricing.

Last week, Imperial Sugar (IPSU) lost 59% of its value in one day after reporting extremely poor earnings. The stock has continued to sell-off over a week later losing an additional 20%. The reason? IPSU is experiencing the worst of all operating squeezes: higher input costs (sugar) and the inability to raise prices to accommodate those costs. In this case, competitive pressures are to blame.

From the earnings report:

“Our inability to increase prices in the face of higher raw sugar costs because of competitive pressures from domestic and Mexican sources was the principal driver of the quarter’s disappointing results,” commented John Sheptor, president and CEO of Imperial Sugar. “Raw sugar purchased during the quarter was priced largely against the March and May futures contracts, which peaked near $40 per hundredweight prior to the USDA import quota announcement in early April. The subsequent decline in the raw sugar futures market which occurred after the quota announcement was only temporary and the raw market has rallied back to near the same level. Our raw sugar costs in the fourth fiscal quarter should see little relief, while sales prices thus far in the fourth quarter have only improved modestly.”

Note that last week, the International Sugar Organization (ISO) confirmed that no relief is in sight from higher sugar prices. 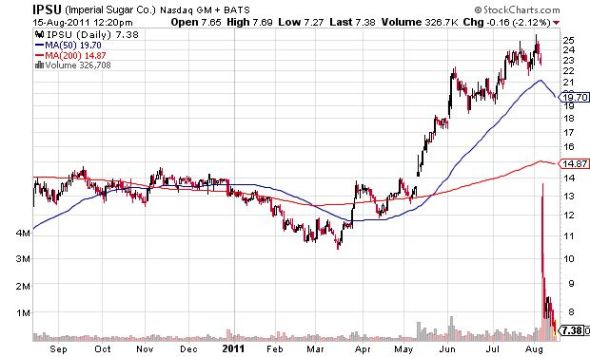 Bloomberg reports that sugar prices are not coming down anytime soon. The International Sugar Organization says that current surpluses are not high enough to satisfy demands of importers for stockpiling. Production costs have also risen. See “Sugar to Stay High as Surplus Not Enough to Replenish Stockpiles, ISO Says.”

If inflation levels remain higher than you like, simply regulate inflation out of existence, right? This logic appears to be the approach of the Venezuelan government as it seeks to curb what it sees as rampant speculation and unfair business practices. According to Nightly Business Report, inflation was 27% last year in Venezuela. The proposed Law for Fair Costs and Prices will create the Superintendence of Costs and Prices that will determine the prices of certain products in an effort to curb inflation. The law bolsters existing price control efforts.

Look for inflation to get worse, black markets to grow, and scarcity of goods to get more severe. It seems to me Venezuela is going after symptoms rather than causes.

Diamond prices have been going up, and Blue Nile is feeling the pinch. The online diamond retailer highlighted high diamond prices as well as high metal prices in its latest earnings report (August 4, 2011):

“While we delivered record second quarter sales and non-GAAP adjusted EBITDA, our results were impacted by rapidly rising diamond and metal prices amid a weakening consumer environment in the U.S. Despite these external headwinds, we achieved sales growth across all product categories, including double-digit sales growth in the non-engagement category.”

DemandTec reports that shelf prices for food will rise “moderately”

DemandTec (DMAN) sells software to help companies optimize the pricing of their products. The company specializes in the retail space.

On a day in which commodity prices and stocks took another plunge, DemandTec released the results of a poll of 16,000 leading retail and consumer products users that asked about pricing expectations:

“Nearly 50 percent of respondents agree that shelf prices will rise moderately as both retailers and manufacturers absorb some margin compression in the coming six months.”

Although it is not 100% clear, the poll seemed to focus on shelf prices of food products. A lot of the margin compression will be coming from commodity prices.